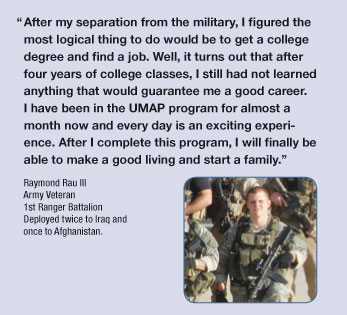 When it comes to training utility workers, President Obama has put federal dollars where his mouth is. When he says, “The top priority for Washington must be helping Americans find jobs and building a sense of economic security for middle-class families,” he means it.

Over the past four years, Obama, working with Labor Secretary Hilda Solis, has supported UWUA programs to train and put veterans to work in the utility industry and backed the union’s efforts to train incumbent workers to remain globally competitive.

Through the President’s efforts, job training and placement with utilities is now a reality for many. And more will soon follow.

Fall classes are now in session for 75 new students enrolled in The Utility Workers Military Assistance Program (UMAP) at Chicago’s Dawson Technical Institute, a satellite school of Kennedy King College and Wright Community College. The program enables students to now earn up to 50 college credits (previously up to 30), plus a one month internship with Peoples Gas, in a certificate program with the ultimate goal of gaining a position in the gas utility sector.

“Classes are going very well. Our first group of students will be graduating in November. We will be adding two additional cohorts [this semester], totaling five,” explains Richard Passarelli, business manager of Local 18007. “The new class of students will include both veterans and displaced workers.”

“Peoples Gas Accelerated Main Replacement Program (AMRP) is a long term infrastructure improvement project in Chicago, which will replace all of the remaining wood, cast and ductile iron natural gas mains with polyethylene pipes, by 2030,” explains Jami Simon, national training director. “They are increasing the pace of upgrades and the need for new hires is crucial. Peoples Gas also committed an additional $1 million to the Power for America Training Trust, to pay for instructional staff.”

Raymond Rau III, an Army vet deployed twice to Iraq and once to Afghanistan, will be among those in the first graduating UMAP class this November.

“What I like most about UMAP is that we are constantly learning new job specific skills that will ultimately lead to a great career. After hours of hands on training and practical exercises, I am beginning to feel quite confident in my technical skills. I am very excited to continue on to the internship and hopefully transition into a rewarding career.”

Danielle Sanders, a 27 year Air Force vet and a group career advisor for maintenance at Pope Air Field in North Carolina, was working two jobs in Wisconsin when she heard about the UMAP program. “I resigned and took a chance. Where can you find a program that provides you with a free education, 50 college credits and a promising job after an internship?” says Sanders.

“I had some challenges my first two month – finishing my commitment to the Air Force and finding housing,” Sanders continues. She reached out to the administrators of UMAP. They worked together with TCF Bank in Chicago and were able to secure long term housing. “I have never met such a great bunch of people, as I have in this UMAP program,” Sanders enthuses. “Everyone was very kind and helpful to me.”