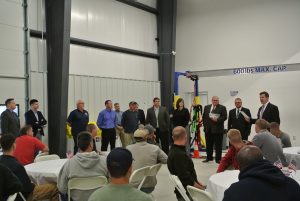 On April 20, 2016, over 30 attendees from the UWUA and Consumers Energy joined the P4A staff in honoring 37 veterans and active duty National Guardsmen who are students in the P4A’s Veteran Gas Bootcamp.  The Veterans Gas Bootcamp is an extension of the agreement between the UWUA’s Michigan State Utility Workers Council, Consumers Energy and the Power for America Training Trust Fund, which was developed to provide employment opportunities to veterans and current active National Guardsmen in the gas field with Consumers Energy.

The speeches concluded with a presentation to all attending veterans and active National Guardsmen of a commemorative coin featuring the logos of all branches of the military in one side and the logos of the UWUA, P4A and Consumers Energy on the other side.